1st Congress of Indian Cartilage Society was held in New Delhi on 12-13th November. Deepak Goyal, who is also Chair of Subcommittee for Developing Regions, ICRS; chaired the Congress. The Congress was perceived very well by the faculties, delegates and Industry. Probably it is for the first time in the world that a full fledged congress was held by any National Cartilage Society, itself. Usually such meetings are held on the sidelines of major congresses hosted by a prominent society. The congress was also an ISAKOS Approved Course.

Following is the brief description of various events.

The final count of registration was 120. There were few ‘no shows’ because of simultaneous Arthroscopic Cadaver Course going on in the city on the same dates.

In spite of best effort to cross check any cross dates between two similar meetings; this Cadaver Course meeting could not be foreseen. Delegates came not only from various states of India, but were also from Iraq, Oman and Nepal. Members of Indian Arthroscopy Society and Delhi Orthopaedic Association were also present during the congress. Congress also saw 32 new members The congress was preceded by Social Programs like New Delhi City Tour and Faculty Dinner on 11th November’ 2011.

Faculty visited 360 years old magnificent Red Fort of the capital city where they were informed about Moghul History of India in detail. Faculty paid their homage at Mahatama Gandhi Memorial, before proceeding for the lunch. Spicy and hot, various varieties of chicken were served at Restaurant Chicken Inn. This delicious experience was first time experience for many of the International Faculties. After lunch, they visited 800 years old Kutub Minar and were awed by its beauty and brave history. Emblem of 1st ICS congress also come from here and hence all were very happy to take their photographs in front of original Emblem of the Congress. After relaxing at hotel, Faculty was taken to a Five Star Hotel for Faculty Dinner. Here they were greeted by Traditional Indian Headgears and they enjoyed their new attire throughout Dinner. Mats was overwhelmed to see a surprise cake on his Birthday. 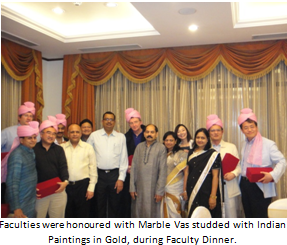 The Scientific program on the 1st day of the Congress consisted of Key Note Lectures, Didactic Lectures, Case presentations, Interactive Discussions etc. Pre Lunch sessions included ‘Basic Cartilage Science Session’; ‘Cartilage Imaging Session’; ‘Session on Introduction of Microfracture, OATS and ACI Techniques’; and ‘Chondral lesions in General Orthopaedic Practice’. Most of the sessions were planned in such a way that International faculties share their experience and research There was another social program along with Conference Dinner on 12th evening. Delegates were thrilled to hear James Hui Hoi Po and Norimasa Nakamura; singing Hindi Melody songs from old Bollywood films. It was fun to watch Persian Belly Dancer, while trying various Indian delicacies during the evening. Soon, Delegates and Faculties; both hit the floor and danced to various Bollywood tunes.

Second day started with few case reports followed by a live surgery for ‘Assessment of Cartilage Lesion and Cartilage Biopsy’. After that; Deepak Goyal operated a case of early Medial Compartment OA with cartilage lesion. He did ‘Microfracture of the lesion followed by Proximal open wedge HTO’. Intense discussion was generated by James Hui Hoi Po during this surgery, who was chairing this session. Last surgery of the day was ‘ACI Implantation case’. Biopsy of this case was done six weeks before and cells were ready for implantation on the day. Delegates coming from various corners of joining the society. All these new members joined as Life Members.

ICRS was kind enough to supply ICRS Membership forms, ICRS Montreal Congress announcements and ICRS Newsletter for all the delegates. This ICRS material was given to all the delegates and some were put on ICRS/ ICS counter. ICRS slide were continuously displayed in between sessions, encouraging members to join ICRS. There was good number of queries to become ICRS member. Goyal directed them to ICRS website for membership application and for the congress registration. 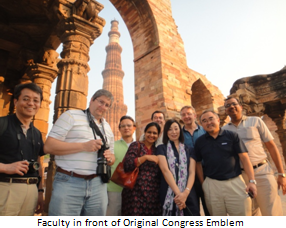 with the delegates, and in the same session national faculty presents their work done with limited opportunities and facilities. Such faculty combination provided an excellent platform for discussion between International and National faculties. There were also intense discussions on cases presented during the meeting. It gave opportunity to delegates to discuss various constraints they face and ways to overcome that; with International Faculty.

Before Tea break, there was a small inauguration ceremony. Raju Vaishya, Organising Secretary of the Congress welcomed delegates to New Delhi. Nishith Shah, President of Society thanked international faculties for their time and contribution to Indian Cartilage Society. Deepak Goyal elaborated the need of Cartilage Repair Techniques in Indian Subcontinent. Society announced that it is society’s honour to offer Patron Membership to Mats Brittberg. A Golden Plaque citing his Patron Membership was presented to him during the inauguration.

Post lunch sessions included; ‘Present results of various Cartilage repair techniques’, ‘Decision Making in Cartilage Lesions of various sizes in different age groups’ & ‘Role of Biomechanics in Cartilage lesions’. Nori’s lecture on ‘Results of ACI vs MTX’ generated too much of heat and discussion. Delegates were happy to learn various techniques shown by faculty during Decision Making session.the country were enthusiast to learn all these new surgeries.

It was decided by General Body that next congress of the Society shall be held in Chennai in November’ 2013. P Rajasekar volunteered to be the next host. Industry was very thankful to the organising committee for giving them this wonderful opportunity to showcase their products. Three companies immediately confirmed their Platinum/ Gold Sponsorship for the next congress. Delegates, industry and faculty were given ample opportunity to have one to one discussion during various social programs and during Dinner. Various Indian companies interacted with faculties for suggestions to improve their designs. Meeting concluded with a thanks note from the Chair, Deepak Goyal.